Counter assistant Katie is serving a customer when pharmacy technician Vicky notices a plaster on her ankle.

“Have you cut yourself shaving, Katie?” asks Vicky.

“What’s that?” replies Katie. “Oh, my leg? No, it’s just a stupid beauty spot that started bleeding. I didn’t want to scare the customers if I accidentally caught it on something, so I thought I’d cover it up for work.”

“Fair enough,” says Vicky. “Has it been troubling you for a while?”

“Funny you should ask that,” states Katie. “It cropped up a few months ago – my boyfriend noticed it before I did – and it has been a bit bothersome. It’s bigger than most – perhaps it’s more of a mole? And it’s a bit speckly. It has felt a bit tingly, but I put that down to it being new and me being more conscious of it than I would be usually. It started bleeding a few days ago but I’m sure it’s nothing to worry about, just annoying more than anything else.”

“Hmm, I’m not so sure,” says Vicky, worriedly. “I think it wouldn’t be a bad idea to have it properly checked out.” 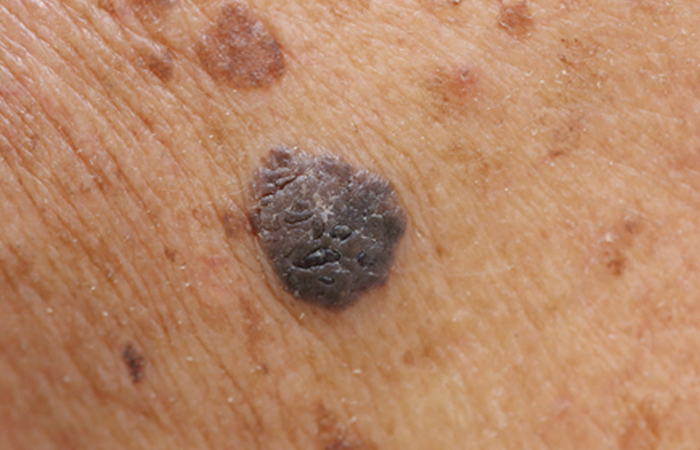 There is a chance that this new blemish Katie has noticed could be melanoma – a form of skin cancer – and the earlier it is picked up, the easier it is to treat. The following list can help identify signs of melanoma:

Basically melanomas are changes to normal skin, which may be one of the above; a dark area or abnormal new mole; or a mole that itches, tingles, bleeds or develops a crust. In women, the most common site is on the leg, while in men the most common location is on the back. However, melanomas can occur anywhere on the body, including in the eye, under nails, and on the soles of the feet and palms of the hands. Any of these signs should be checked out by a GP.

Melanoma is a type of skin cancer than starts in melanocytes cells that are found between the dermis and epidermis (inner and outer skin layers). These cells are responsible for producing melanin, which gives the skin its colour by absorbing ultraviolet radiation from the sun.

According to Cancer Research UK, melanoma is the fifth most common cancer in this country, with around 16,000 people diagnosed with the condition every year. Survival rates are good, with just under 90 per cent of men and just over 90 per cent of women with melanoma surviving at least a decade after their diagnosis. The key to a positive prognosis is early detection, as this means there is a smaller chance of the cancer having grown into the skin and spread to other areas or sites of the body.

The main risk factors for developing melanoma are age, ultraviolet light, having fair skin or freckles (particularly if born in a hot country), sunburn, sunbed use, having a large number of moles or birthmarks, and having a family history of melanoma or a personal history of other cancers. There also appears to be a link with high body mass index, female sex hormones, and certain chronic conditions.

Treatment depends on whether the melanoma is localised or has spread. If the former, surgery is usually the main treatment, with the abnormal area of skin plus a small amount of surrounding tissue removed. If the cancer has become more widespread, more invasive surgery plus other treatments such as chemotherapy, laser treatment, immunotherapy, or targeted cancer drugs may be brought into the management plan.